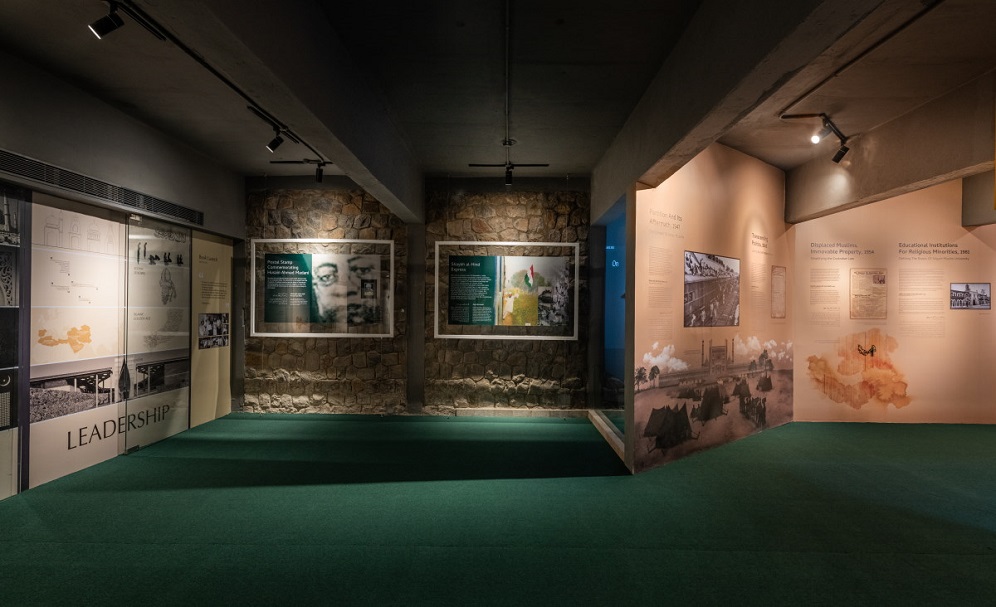 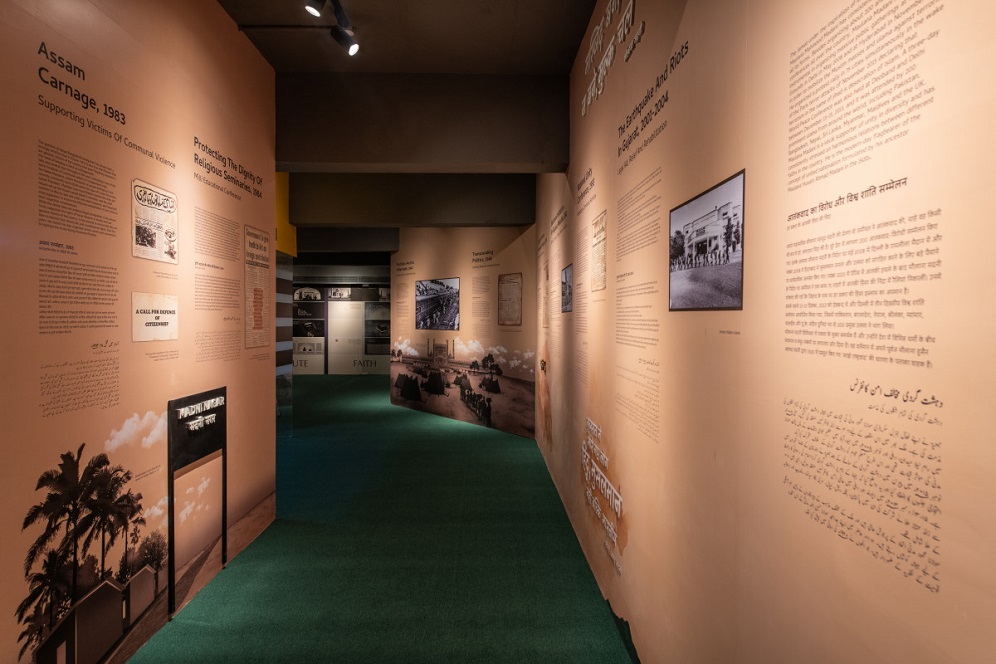 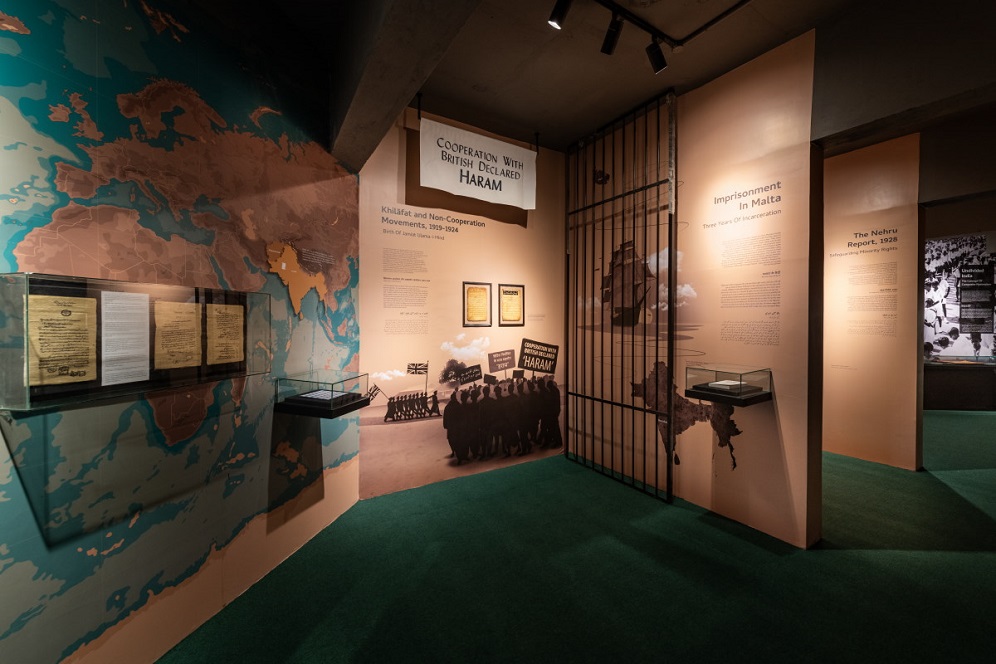 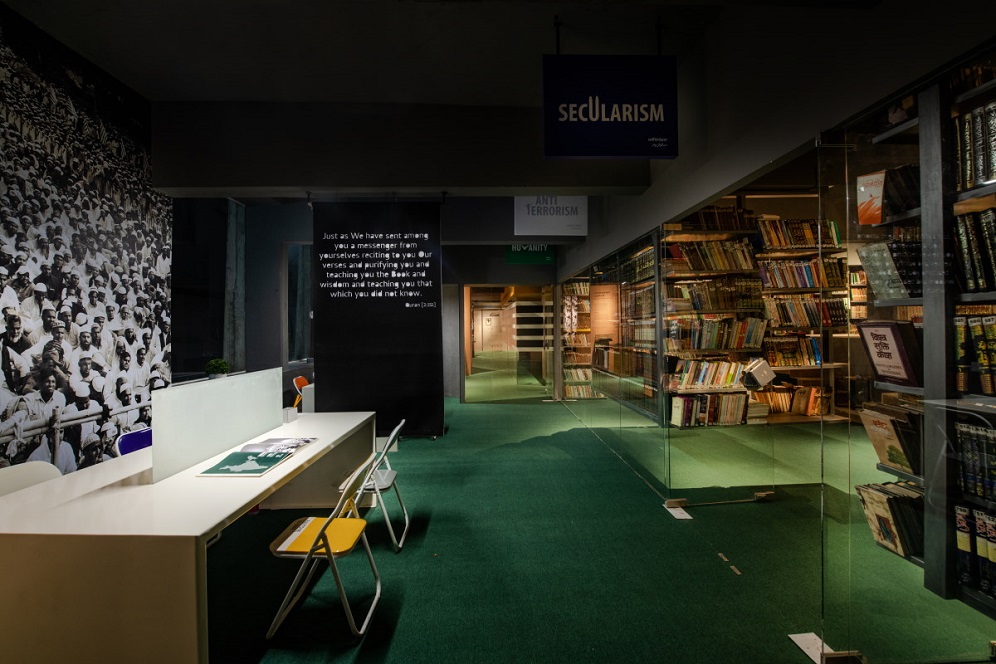 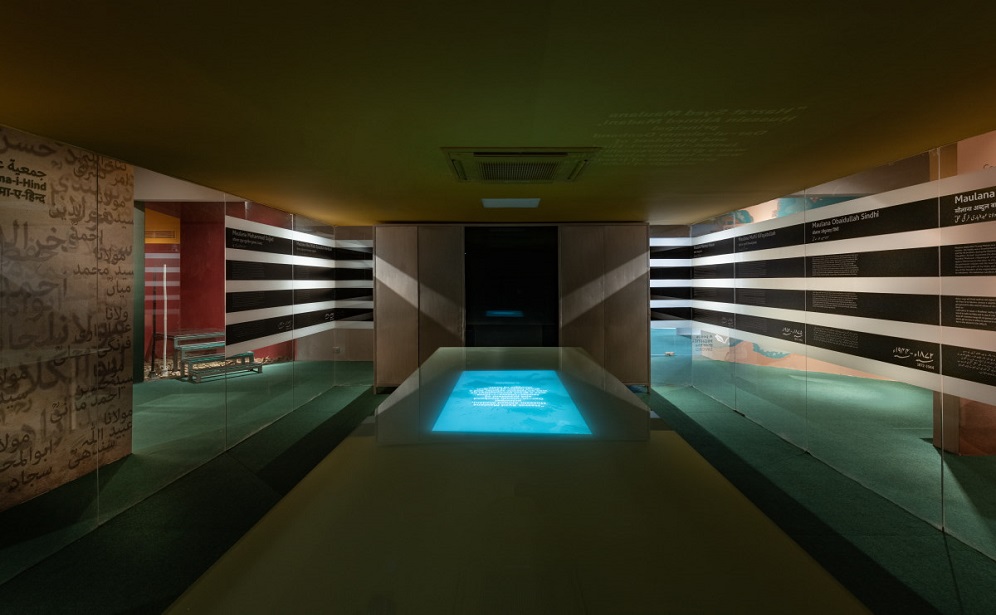 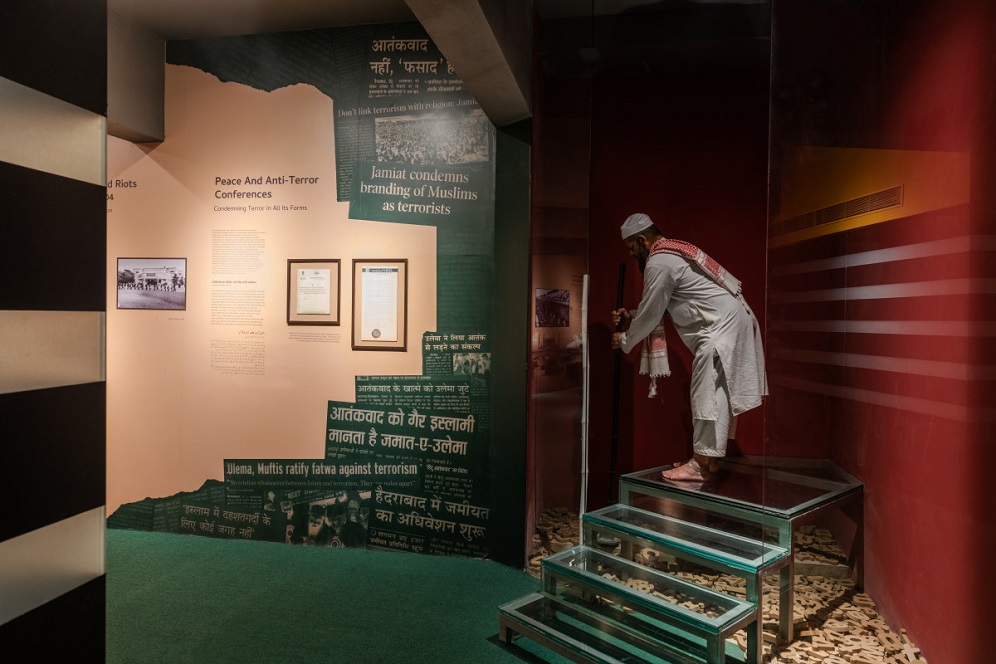 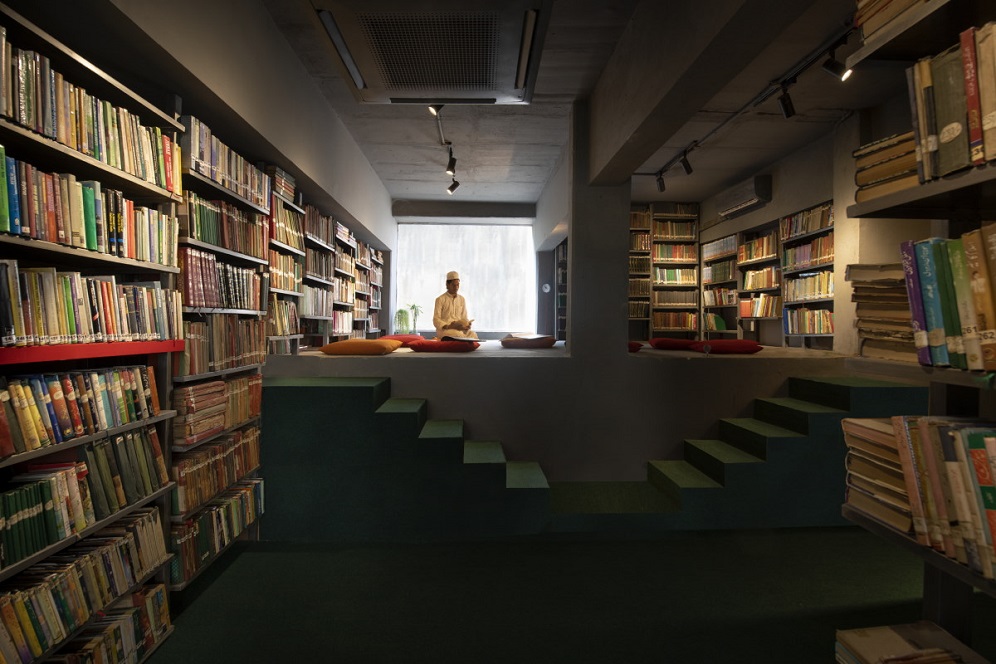 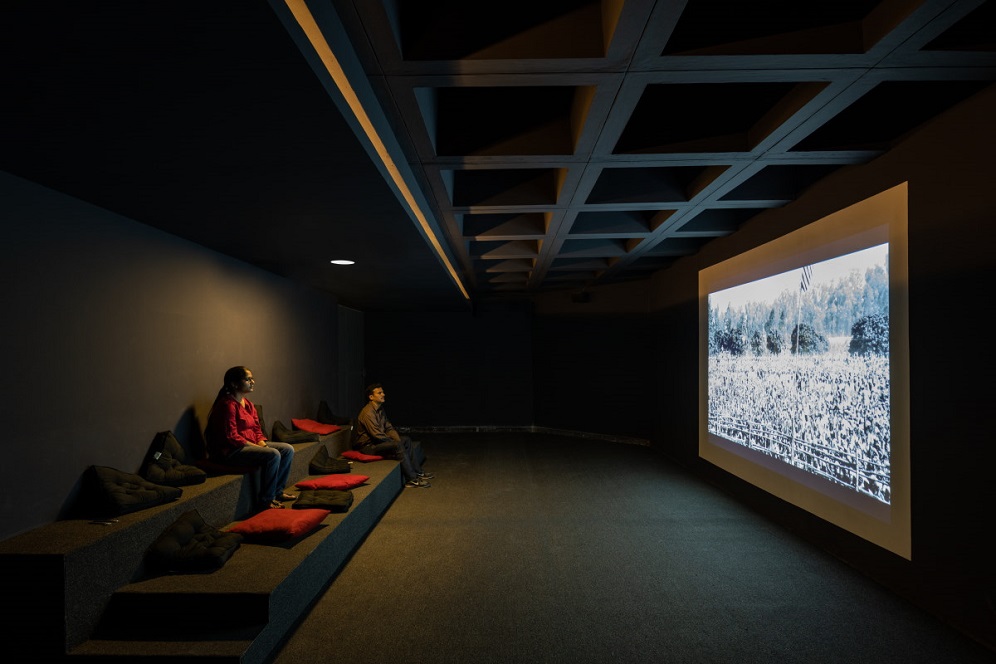 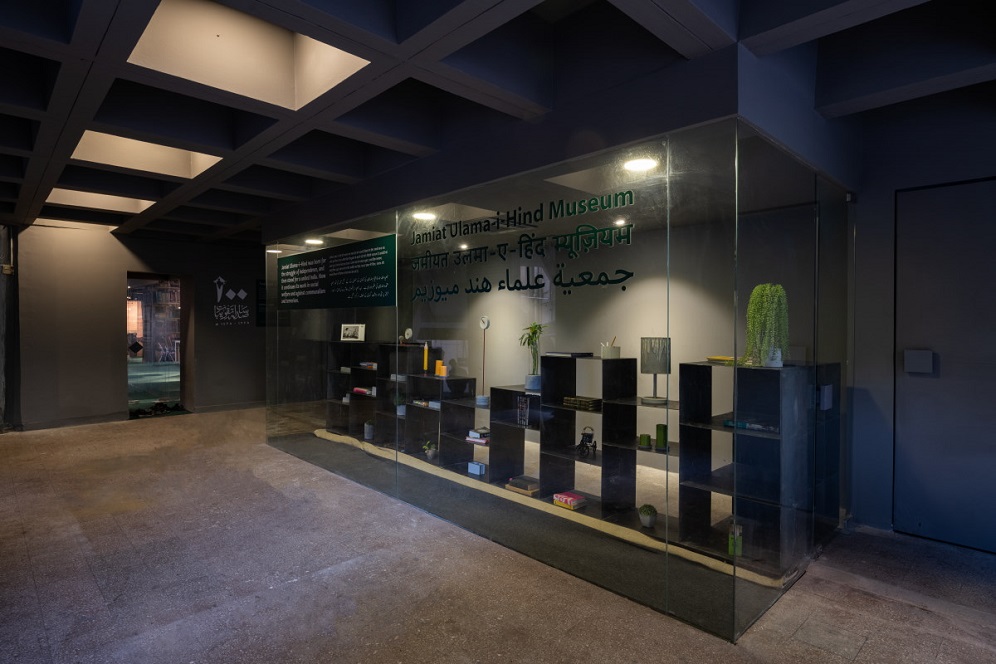 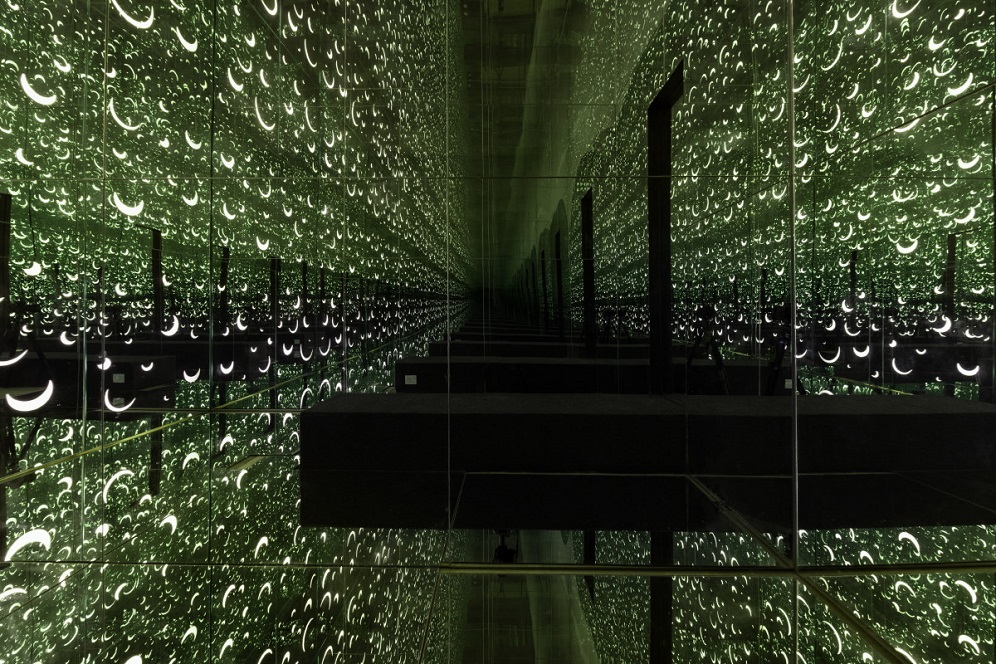 Gurugram-based Design Factory India has designed the Jamiat Ulama-I-Hind Museum in New Delhi, which was to visualize a museum that commemorates the mission, values and struggles connected to the Indian independence movement, secularism, anti-terrorism and humanity through installations, immersive experiences, digital interactions and informative panels.

The JUH was instrumental in the struggle for India’s liberation, and visitors begin the journey with a documentary that details the JUH’s evolution over a century. They enter the library with its book and record collection that explains Islam and the role of the JUH leaders in the Freedom Struggle. The sitting spaces on the floors illuminated with natural daylight filtering through a glass wall, epitomizes enlightenment and the true meaning of Islam.

Called the Octagon, this space celebrates the organization’s commitment to the nation through vinyl infographic panels, green carpet flooring and a muted color palette. Historical documents, written records and stamps released in the name of the leaders are displayed in glass boxes, which creates an emotional connection between the visitor and the context. 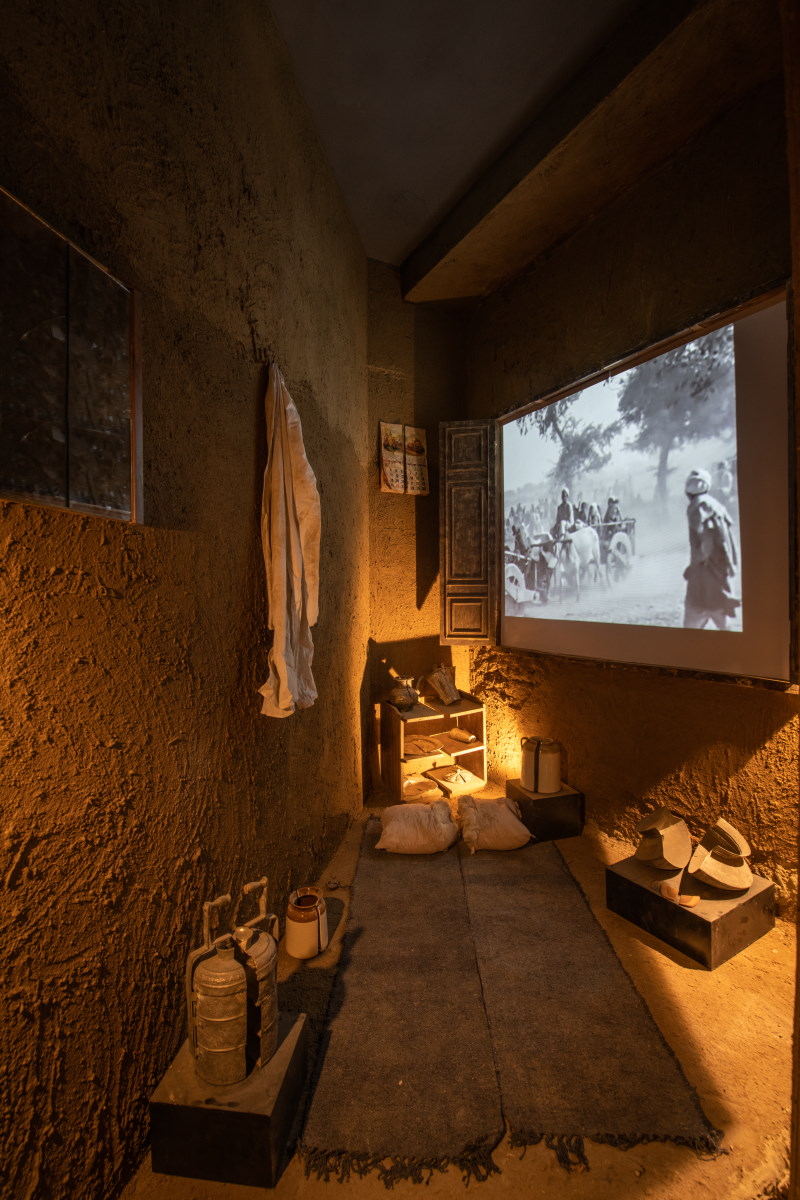 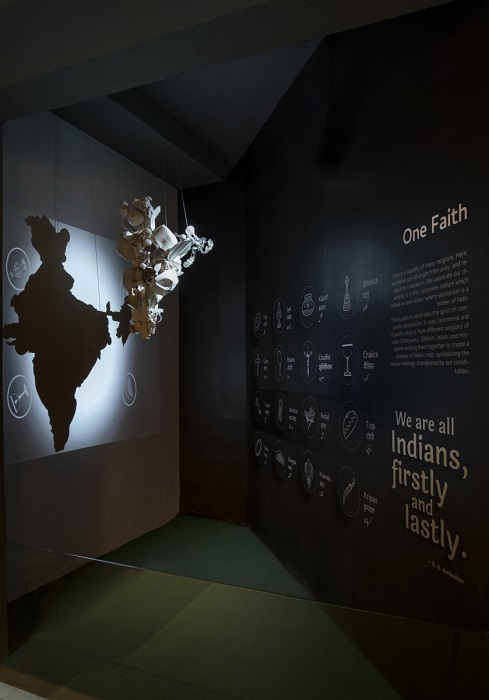 Handcuffs suspended from the ceiling remind the visitor of the thousands of arrests made during the freedom struggle. A symbolic representation of the 1947 Partition is created, with a line that resembles the India-Pakistan border. Black and white flags block the way before the experience zone, which represents the JU’s opposition to Partition and desire for an undivided India. The eventual Partition is visualized by a small house with mud-textured walls (depicting life during Partition) representing the pain of leaving behind the homeland. Common articles from the period, such as pillows, furniture, utensils, mirrors, calendars, etc., are separated into two halves – adding to the emotion. An audio-visual projection displaying footage from pre-Partition India gives insight into the times left behind.

Moving to the third zone, a sculpture is adorned with ceremonial and ritualistic objects belonging to different religions – Christianity, Sikhism, Islam and Hinduism. The sculpture casts a shadow resembling the map of India, which signifies its unity and strength in diversity and pluralism.

Next, a kaleidoscopic double-height Infinity Room features an immersive experience by creating the illusion of an infinite space. Backlit sandblasted crescent moons are cut out on the hexagonal mirrored walls to represent religion. The lights change into the Tricolor, which represents the national spirit. An installation represents the JUH’s struggle against terrorism and promotes, nation, community and humanity. Visitors can vent their anti-terrorist sentiments by smashing the terror attacks carved in laser-cut 3D acrylic words.

A multipurpose glass box at the center serves as a conference room or a temporary exhibition space, with just a table in the center and a projection device. The box is partially covered with frosted vinyl in black and white strips representing the JUH flag, where each stripe contains information on the leaders of JUH. A thought bar encourages visitors to add their opinions and suggestions about the museum or the organization, along with political topics such as triple talaq, madrasa education, fatwas and more.